Controlling the Z80-MBC2 from Android on chromeOS

ChromeOS 104 landed on my Chromebox delivering a pleasant surprise, the ability to access serial USB devices from Android apps.

When I plugged the Z80-MBC2 Z80 homebrew computer into the Chromebox under chromeOS 104, the system popped up this notification allowing me to connect the device to Android or Linux, not just Linux as before: 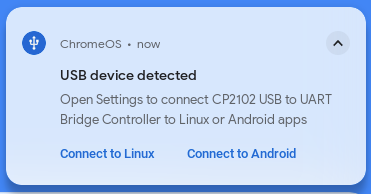 The notifcation confirms the detection of the Z80-MBC2's CP2102 chipset and says:

I had long been looking forward to accessing the Z80-MBC2 from Android. I researched a great terminal emulator app, Serial USB Terminal, which can connect to serial USB devices, features basic ANSI support, and can transfer files via XMODEM. Although the app runs fine on the Chromebox, I never figured how to connect to the Z80-MBC2. It turns out it wasn't possible, until chromeOS 104.

Selecting the notification's option to connect to Android prompts to run Serial USB Terminal, optionally setting it as the default app for Android connections.

I interacted a bit with the Z80-MBC2 from the Android terminal emulator and it's usable. Here's what a CP/M 3.0 session looks like in the app in landscape tablet mode, the window layout that works best with a terminal: 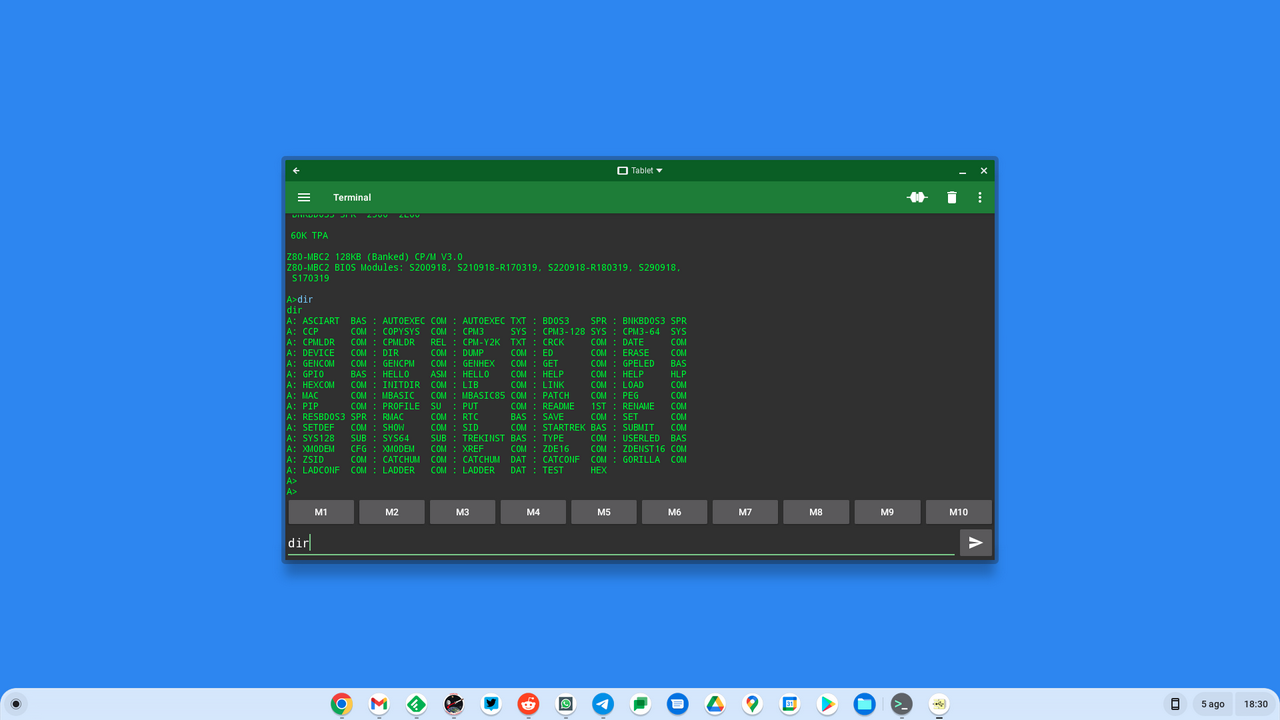 Input goes in a text field separate from the terminal output. It feels awkward on the desktop but natural on mobile devices with touch interfaces.

I tried transferring a file via XMODEM from the terminal emulator to the Z80-MBC2 under CP/M 3.0. But, as with Crostini Linux, nothing happens and the XMODEM transfer doesn't work. More experimentation may provide clues on the XMODEM issue.

So far I haven't played with the Z80-MBC2 much from Android, but it's great to have another option for controlling the device.

On my Chromebox, XMODEM file transfer from Linux to the Z80-MBC2 is broken, but I've been trying with every new chromeOS version just in case an update delivers a fix. So far the transfer still doesn't work with chromeOS up to 104.

Chrome OS 101 was supposed to prompt to upgrade Crostini, its Linux container subsystem, from Debian Buster to Bullseye. A 9to5Google article on Chrome OS 101 noted:

Linux on Chrome OS now uses Debian 11 (Bullseye) with upgrade prompts available in the Settings app for those on Debian 10 (Buster). You also now get an upgrade log that’s saved in the Downloads folder.

However, when Chrome OS Stable 101.0.4951.59 landed on my ASUS Chromebox 3 with Crostini running Buster, I got no such prompt. A comment by the user Mr. Smith on an About Chromebooks post about upgrading to Bullseye clarified the prompt is hidden behind a flag.

I went through the upgrade process Mr. Smith outlined and it worked, sort of. Here are the steps I took:

Sure enough, after rebooting the system I got the upgrade prompt, accepted it, and watched a dialog reporting on the upgrade progress. A dozen minutes later the process ended with the following errors:

I'm not sure what triggered the errors. But a few quick checks of Crostini suggested the installed apps work and nothing major seems broken. Therefore, I'm leaving the container upgraded to Bullseye 11.3 as is and monitor it.

In praise of Crostini Linux

Although Linux had been my daily driver for almost two decades, when I switched to Chrome OS I regarded the Crostini Chrome OS Linux container mostly as a curiosity.

Sure, I was eager to have some fun with Linux on my Chromebox. But I already lived fully in the cloud and web apps met all my computing needs. I assumed the main use cases for Crostini were advanced development or DevOps.

To check out Crostini, I installed some astronomical image visualization and processing software for Linux. Next, I used Python preinstalled on Crostini to test the code I was writing with Repl.it and make sure it ran on a different system.

When I began working on Suite8080, a suite of Intel 8080 Assembly cross-development tools in Python, I needed some CP/M emulators and 8080 tools to test the Python programs I was developing, as well as my Assembly code. Again, installing and running such Linux software on Crostini worked well.

I came to love Crostini, now a key component of my Chrome OS toolset. It lets me run all sorts of niche applications and specialized software for my hobby projects and geeky interests.

Now that Chrome's reading list icon is next to the omnibar, I wondered whether I'd notice it and use the feature. Nope. To maximize the content area, I keep the reading list collapsed and the icon isn't prominent enough to notice.

So I'm back to my read later tool of choice: Google Keep.

I use exclusively Chrome OS on the desktop and store most data in my Google account. So Spinbackup is the best cloud-to-cloud backup and recovery tool for my needs.

It allows to back up the data from my Google account in Gmail, Google Drive, Google Photos, and other Google products. Spinbackup also supports personal Google accounts for individual use, is affordable, and lets me access the data even if I lose access to my Google account (don't take this feature for granted).

The product has a few rough edges though. Two-step verification comes with no backup codes. And there's no way of updating a payment method, other than canceling a subscription and purchasing it again with a different method.

The SkySafari 6 Plus astronomy app for Android still works on my Chromebook but no longer on my Chromebox. The app doesn't detect any Internet access despite the Chromebox being wired to a 1 Gbps fiber connection.

It's emblematic of Google never encouraging Android developers to adapt their apps to Chrome OS.

This is also where the reading list icon sat, which is why I kept not noticing and using it. Chrome 99 moved the icon next to the omnibar, where it's always in view. I'm meaning to try the reading list and the new location will hopefully help me notice it.

Chrome OS is my only desktop operating system and I store nearly all data in the cloud.

When on a website or online platform I see a file I want to keep, such as a PDF document or an image, I save it from Chrome to the local storage of my Chrome OS device. From there I upload the file to Google Drive and remove the temporary local copy.

But I keep forgetting Chrome OS provides a more straightforward, cloud-to-cloud way of doing it without going through the local storage.

The Files app, the Chrome OS file manager, natively mounts my Google Drive space under Google Drive > My files and makes it accessible like a local folder tree. All I need to do to save an online file is to navigate to the desired Google Drive folder via the file save system dialog, a specialized version of the Files app.