Once the V20-MBC or Z80-MBC2 is plugged into a USB port of my Chromebox, starting a Minicom terminal emulator session makes the remote device boot up and display progress messages.

At some point, with the V20-MBC, starting Minicom did nothing and only the terminal printed its signon messages. The remote device wouldn't boot and there were no signs of life other than the lit LEDs.

The flat cable that runs from the V20-MBC ends in a serial-USB adapter with a USB connector that goes into the Chromebox. This is the adapter card with the USB connector at left and, at right, the pins the cable's connector plugs into: 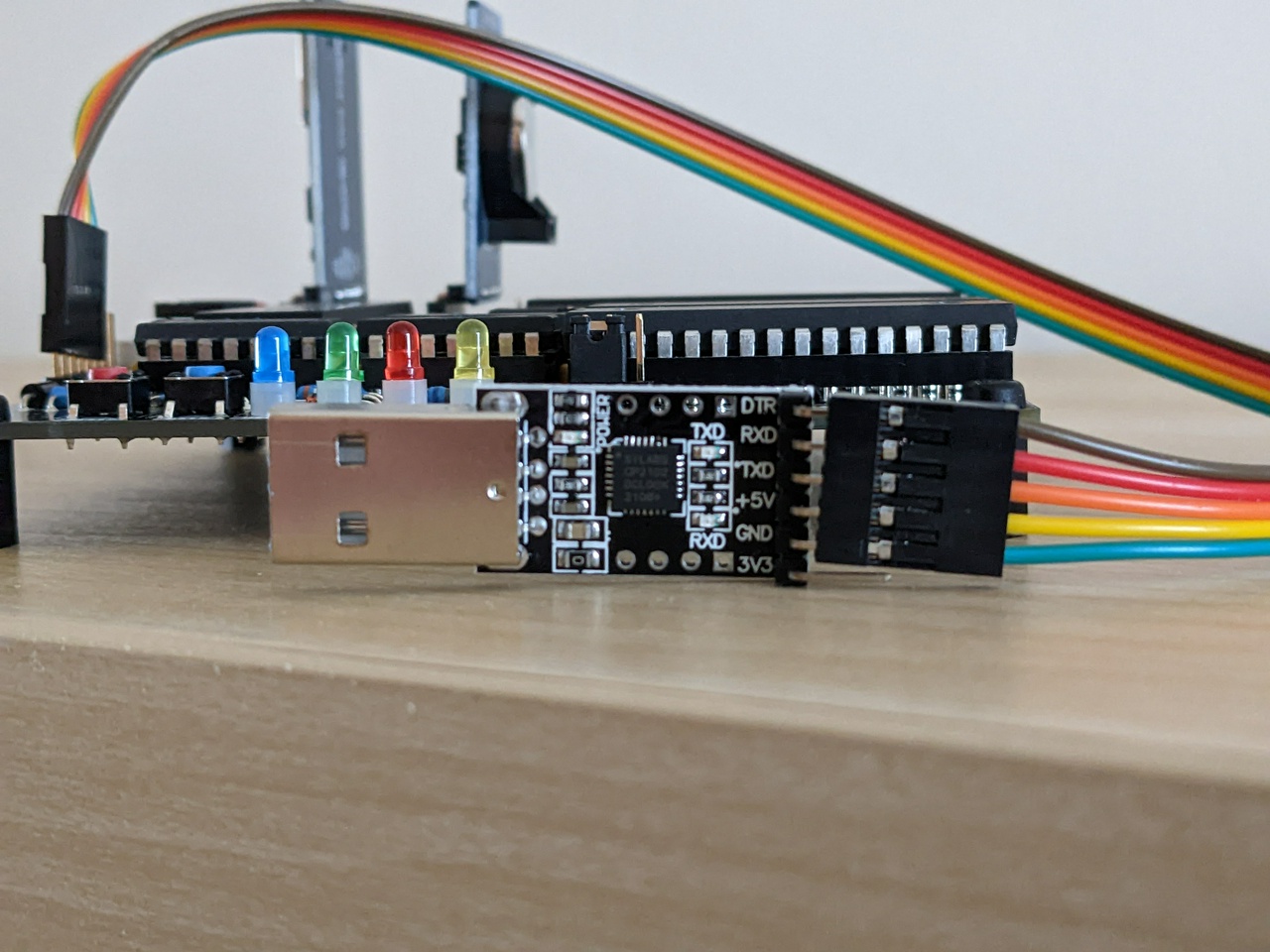 To troubleshoot the issue I unplugged the USB connector from the Chromebox, which is when the cable's connector came out from the pins. That made clear the issue was a loose plug. Plugging the adapter back into the cable, reconnecting to the Chromebox, and starting Minicom made the V20-MBC automatically boot up as usual.

Just4Fun, the maker of the Z80-MBC2 and V20-MBC homebrew computers, clarfied to me the absence of some files is intentional.

Under CP/M-86, the TOD.CMD command for displaying and changing the date and time was left out because, on the V20-MBC, the date can be changed only from the boot and configuration menu. ASSIGN.CMD, a command for assigning physical to logical devices, is specific to the CP/M-86 version for the IBM PC and hence redundant on the V20-MBC.

Just4Fun doesn't recall exactly, but the absence of the Turbo Pascal sample .PAS files on the Z80-MBC2 is likely a consequence of the development process, possibly an early mass storage space constraint.

The V20-MBC homebrew computer I ordered finally arrived and I started checking it out.

I got a V20-MBC Black Edition. It's a version of the V20-MBC with higher quality parts and a black PCB that, along with most of the other components also black, makes for a slick look: 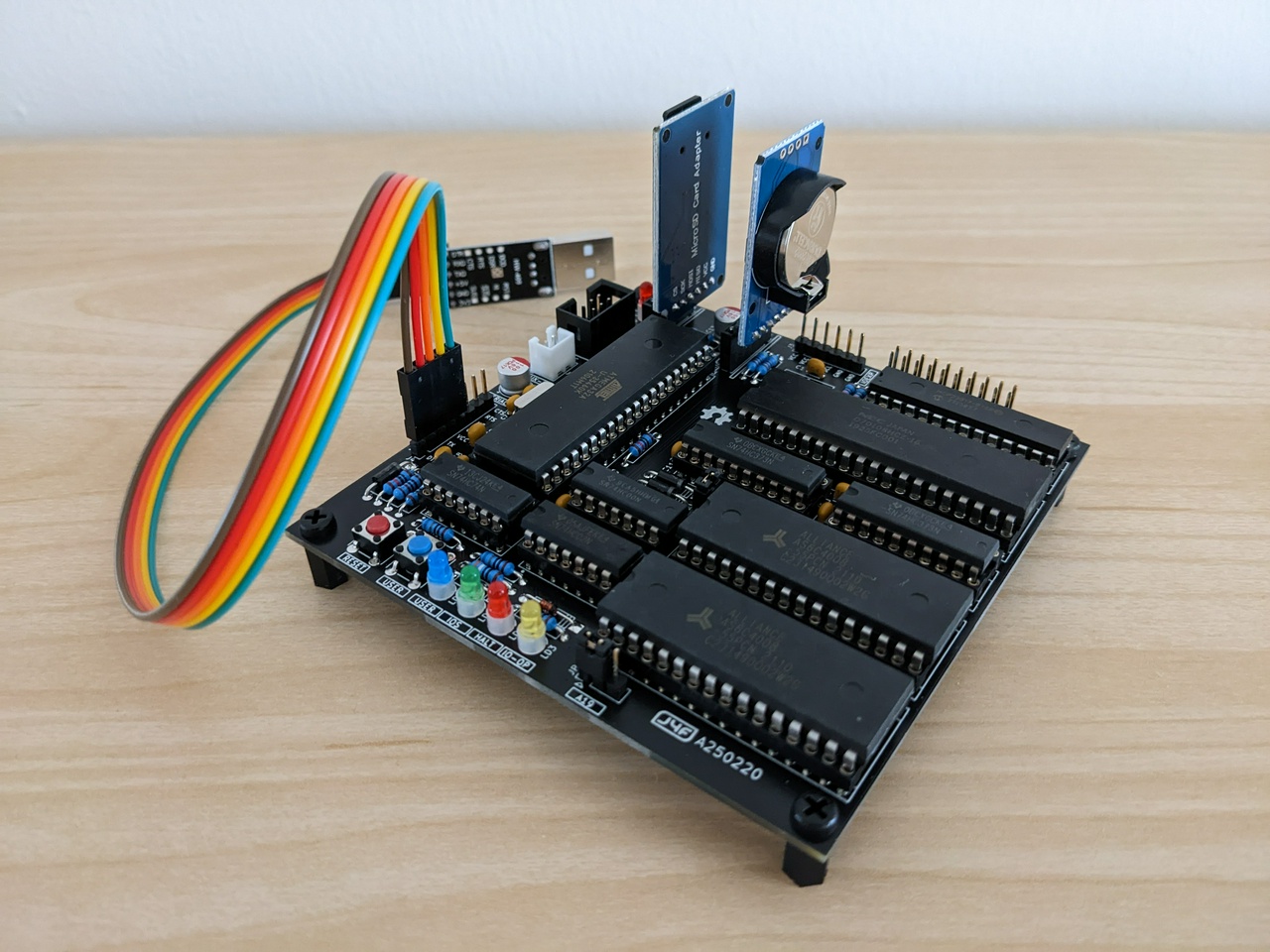 I already love the device. These notes are my early impressions, but I'll continue sharing my experience with the V20-MBC.

Both homebrew computers have similar size and layout and are accessed the same way, i.e. with a terminal emulator running on a desktop computer, a Chromebox in my case, connected via a USB serial line. Here is the setup, with the Chromebox at the top: 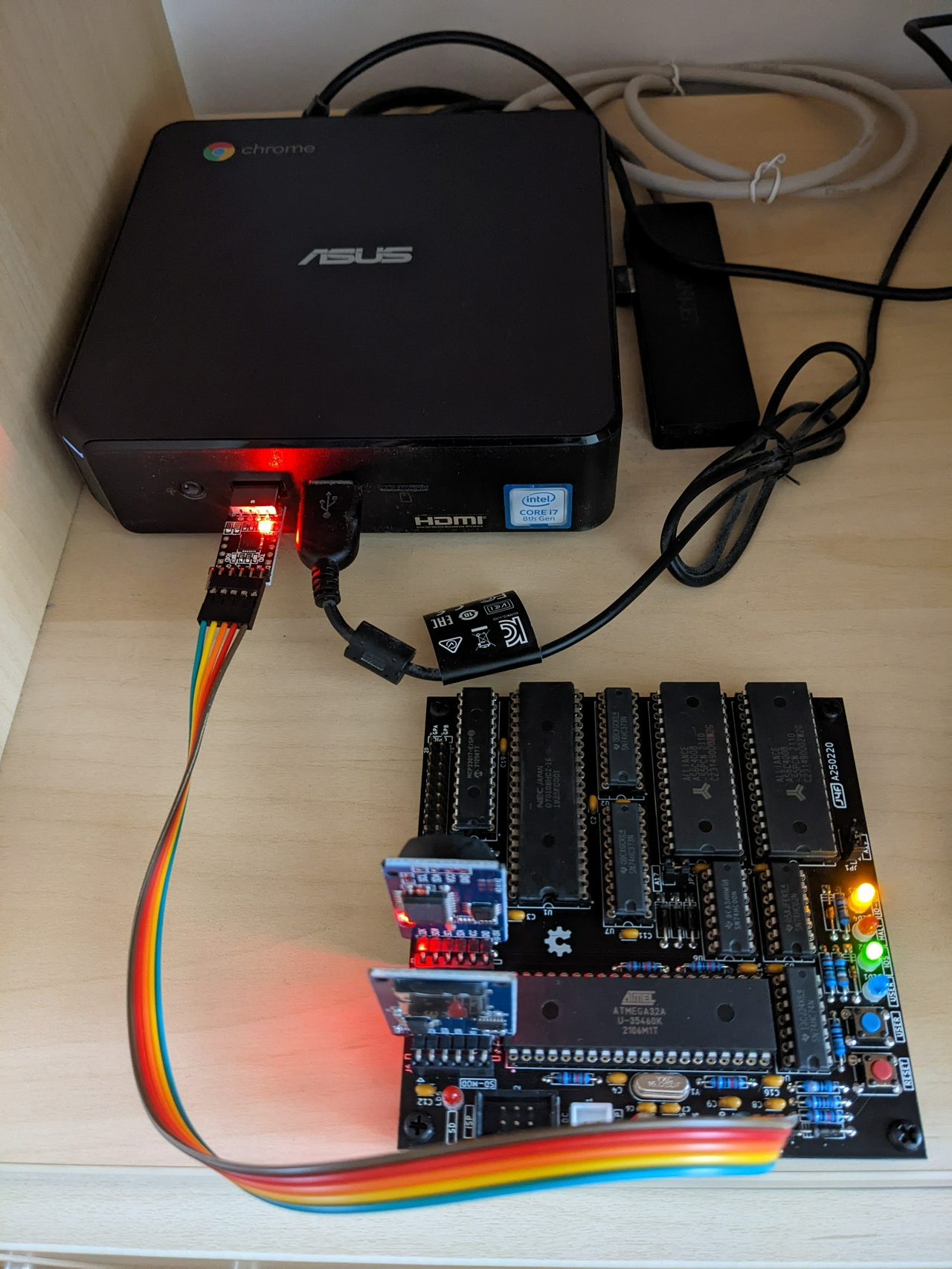 The V20-MBC is operated the same way as the Z80-MBC2, except for a couple of differences.

To account for the two CPUs, the boot and configuration menu duplicates the entries that load executable code. This is the menu in a Minicom terminal emulator session under Crostini Linux on the Chromebox: 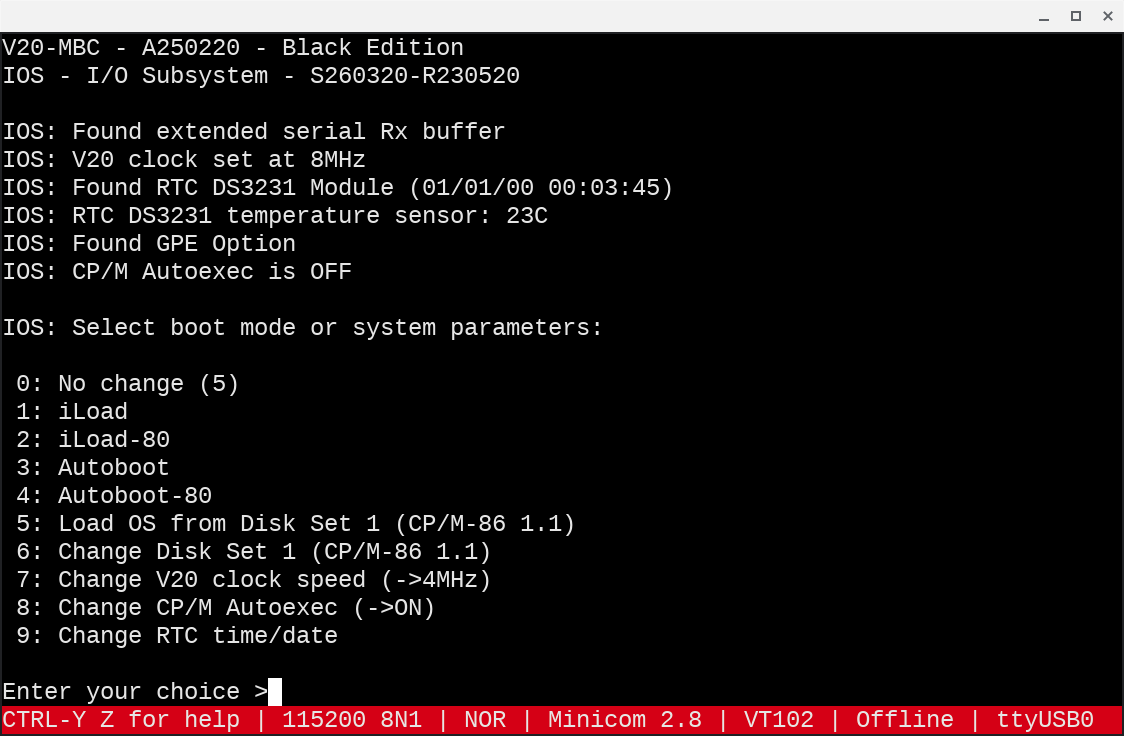 There are two options for uploading an executable in Intel HEX format to run on the bare hardware with no operating system, iLoad for 8086 code and iLoad-80 for Intel 8080 code. Similarly, Autoboot automatically boots a designated 8086 binary, Autoboot-80 an 8080 one.

Although I never used CP/M-86 before, thanks to my prior experience with CP/M-80 the 16-bit operating system looks familiar and I already feel productive. Aside from the additional transient commands of CP/M-86, the only major difference is executable program files have the .CMD extension instead of .COM as on CP/M-80. This screenshot of the A: drive directory shows the extensions: 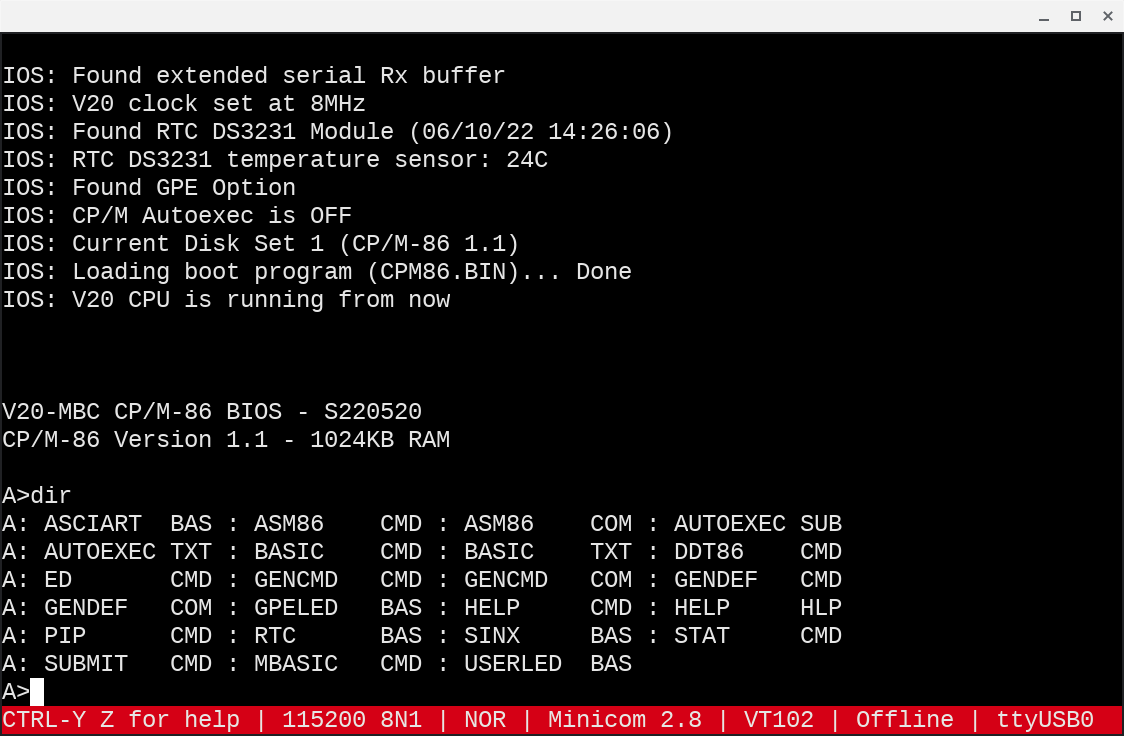 A quick check reveals some CP/M-86 files are missing, such as the TOD.CMD and ASSIGN.CMD transient commands. This is not unexpected as the Z80-MBC2 is also missing some files, e.g. STAT.COM and the Turbo Pascal sample .PAS sources. No big deal, it's easy to find and download suitable replacements.

I'm getting a V20-MBC homebrew computer

I couldn't resist. I ordered an assembled V20-MBC Black Edition kit with 1 MB RAM, a homebrew computer by the same prolific maker of the Z80-MBC2. The devices share the same design, except instead of a Z80 like the Z80-MBC2 the V20-MBC features a Nec V20 bundling the 8088 and 8080 CPUs.

It's exactly what I needed, the perfect match for running my Assembly code on actual hardware and a complement to the Z80-MBC2.

The shipping is on its way to me, I'll share my experience with the V20-MBC.