Reading Writing an Interpreter in Go

I'm reading the book Writing An Interpreter In Go by Thorsten Ball, which I got along with the sequel Writing A Compiler In Go.

I have always been fascinated by compilers and seeked good learning resources. These books bridge the gap between short tutorials that teach how to write an arithmetic expression parser, and 900 page compiler tomes packed with math.

I don't know Go, but Ball designed the books and sample code so that no knowledge of the language is required other than a general programming background. All I know about Go comes from reading the Wikipedia entry and a short reference. Yet the code of Writing An Interpreter In Go is easy to understand, reads as pseudocode, and is arranged in short blocks rarely spanning more than a page.

I really love Writing An Interpreter In Go.

The book presents the material in a smooth and clear progression and anticipates the questions the reader may have. For example, whenever I wonder why some code does or doesn't do something, the next paragraph acknowledges and addresses the hurdle.

I hope Ball's books will help me rewrite the assembler of my Suite8080 suite of Intel 8080 Assembly tools, finally replacing the ad hoc syntacting analysis mess with a true and extensible parser.

Why I'm boosting more on Mastodon

You know what I envied of those influencers with millions of followers? The magic of tweeting a question and getting valuable answers and advice from knowledgeable people.

I'm no celebrity, but on Mastodon I'm getting the same experience with orders of magnitude fewer followers.

As a retrocomputing enthusiast, it's a lot of fun to explore and program my V20-MBC homebrew Nec V20 computer. But CP/M-86, one of the operating systems the V20-MBC runs, was eclipsed by MS-DOS back in the day, leaving little surviving documentation and literature. Especially about CP/M-86 development.

So the Open Library listing of the book CP/M-86 Assembly Language Programming by Jon Lindsay (Brady Communications Co., 1986) caught my attention. Sadly, the text isn't available. I decided to try to track down the book, starting by asking for help on comp.os.cpm.

Without expecting much, I also posted a toot to my Mastodon account in case anyone had useful clues on the book. What happened next blew my mind.

Within a day the post was boosted over a hundred times, got some fifty stars, and received dozens of valuable replies. The replies contributed promising leads, tagged others who might know something, suggested workarounds or other lines of inquiry, and started a few interesting side conversations. Everyone went out of their way to assist.

I was speechless, breathless. Literally. I didn't even know how to adequately thank the many who chimed in.

This isn't possible on Twitter, where the algorithms boost celebrities and influencers and bury everyone else.

You may think this overwhelming support has something to do with my 1.1K Mastodon followers. But I've been having a similar experience since joining Mastodon ten months ago. I'd say the critical mass is somewhere between a few dozen and a couple hundred followers.

I want to give back. I want to give others the opportunity of a similar positive experience, which is within reach of everyone in the Fediverse. Boosts proved crucial to amplify my quest for help, so I'm boosting more toots for a chance to reach someone who may be interested or willing to help.

People are the ultimate algorithm.

I'm collecting and reading more Pascal programming books than I ever did.

My Z80-MBC2 and V20-MBC come with Turbo Pascal for CP/M preinstalled. Using the environment is making me rediscover Turbo Pascal and realize it's great for creating small CP/M tools and programs.

To take advantage of Turbo Pascal I have been gathering old books and other Pascal learning resources that cover the CP/M version I use, selecting only the best and most interesting.

All of them are available online, for example at the Open Library or Bitsavers.org. But these works are too precious and may disappear, not to mention the high prices of rare retrocomputing books. I want backups, so I bought used copies of some of these. Here's what my Pascal programming retro bookshelf looks like: 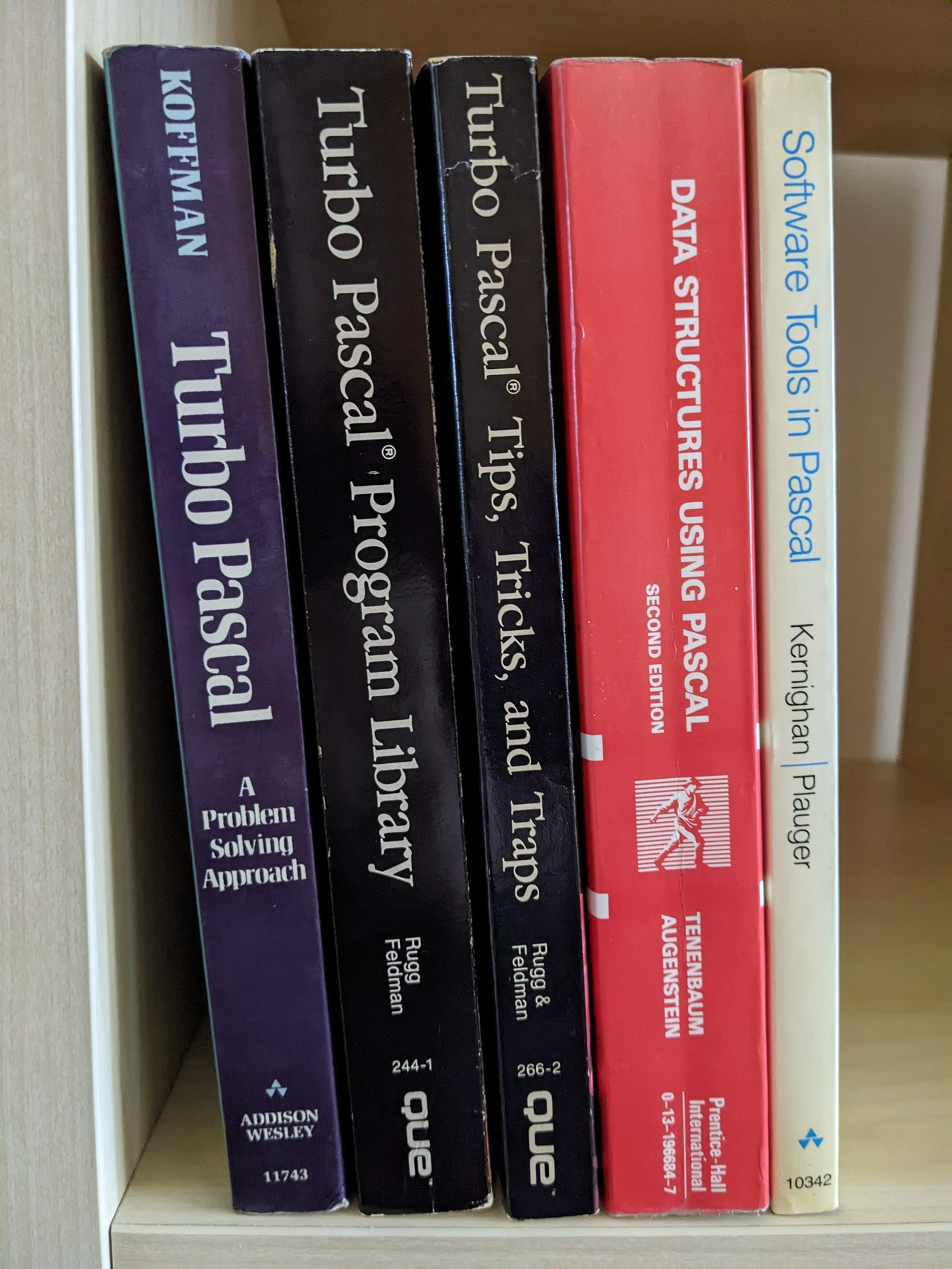 These are the Pascal books and resources I reference most often, along with notes on what they cover or why I like them:

I was a heavy user of shareware software but my experience was like a story with missing clues and no ending. Reading Shareware Heroes: The renegades who redefined gaming at the dawn of the internet by Richard Moss filled the gaps, completed the story, and gave a sense of resolution. 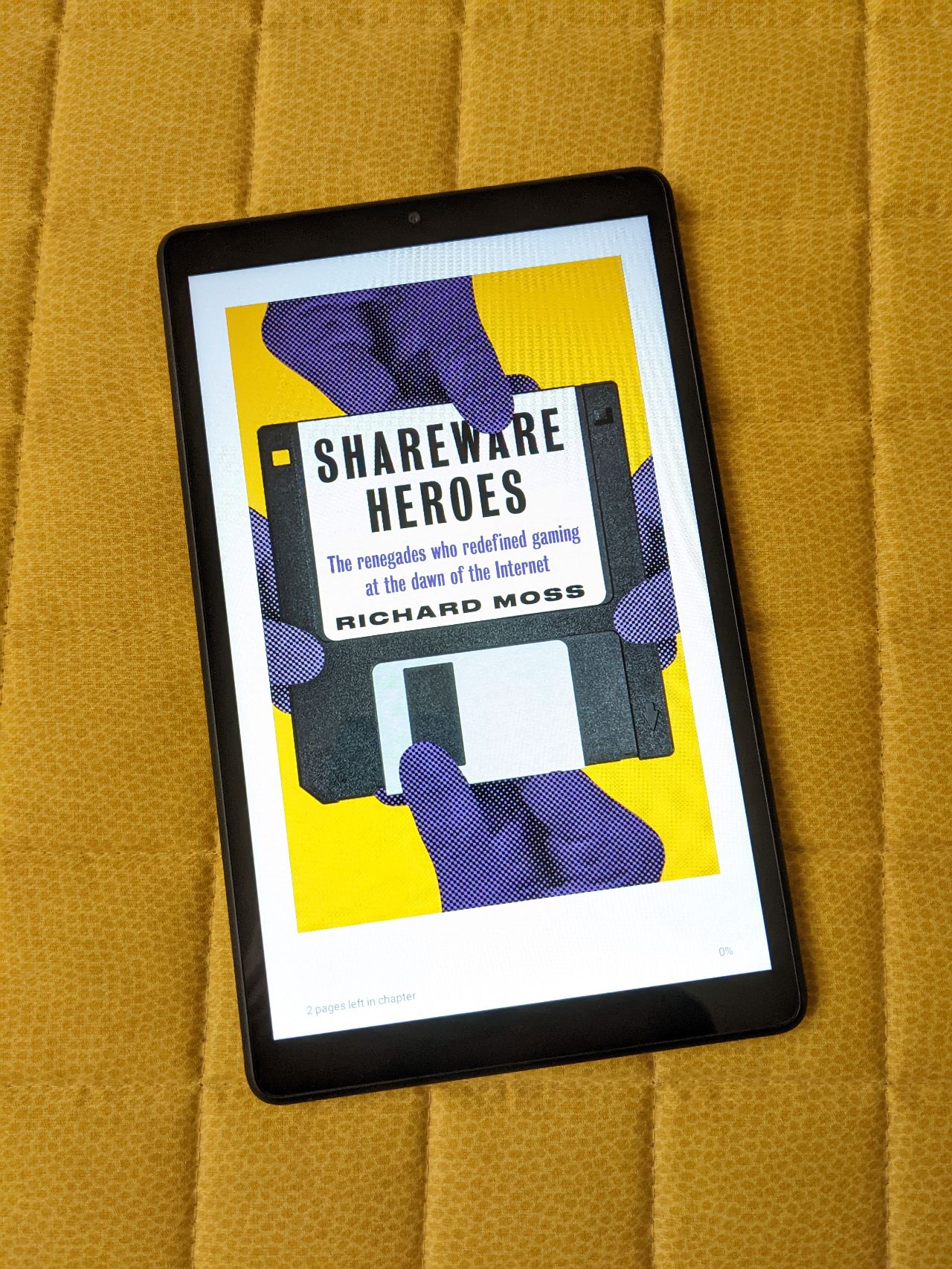 I encountered shareware via the Amiga Fish disk collection, and later MS-DOS productivity software and utilities such as the PC-Write word processor and the CompuShow image viewer.

As an Italian student I loved the affordable programs and the wide selection of shareware, much wider than the fewer and expensive packages by traditional American software houses local retailers carried. I assumed everyone else loved shareware, so I always found puzzling this distribution model was little known even among computer geeks. Equally puzzling was why shareware seemed to have faded since the late 1990s.

Later I realized my narrow focus on productivity software and programming tools made me miss major events, hits, and market players of gaming shareware, which I never was into.

There were other things I didn't know or understand at the time, such as why some shareware never made it to Europe. And, not having owned a Mac until well into the Internet era, I wasn't aware of the role of Mac shareware. Finally, I always wondered about the business side of shareware.

Thanks to accurate and extensive research based on original sources and interviews, Shareware Heroes puts the pieces together and presents a complete, coherent history of shareware from the early days to the Internet era. It paints the big picture, discusses shareware in the context of the computer industry, traces the evolution of shareware business models, and ties the past with the present from early shareware titles to the contemporary indie scene.

Although I'm less focused on gaming, the book has a lot of material also on the application software and utilities at the roots of shareware. But I found the coverage of gaming equally interesting even if I'm a non gamer. For example, I realized the key role of Apogee and id in both the evolution of gaming and software business models.

Interestingly, Shareware Heroes indirectly provides some historical context on the dispute between Epic Games, Apple, and Google over app store fees. Founder Tim Sweeney has always been highly competitive since the early days of Epic Games, for example in his rivarly with Apogee and id.

Sweeney is a tough leader, Apple and Google should have seen it coming. Their executives may want to read Shareware Heroes.

If you lived through the personal computer revolution of the 1980s, you may have read some books that got you hooked with programming. These works led the reader through the intellectual adventure of using computing to explore interesting problem domains.

Two recent Python books bring back this fascination and excitement with programming, Impractical Python Projects: Playful Programming Activities to Make You Smarter and the sequel Real-World Python: A Hacker's Guide to Solving Problems with Code, both by Lee Vaughan and published by No Starch Press.

They are not Python tutorials or guides. Instead, they present stimulating coding projects for non-programmers who want to use Python for doing experiments, test theories, or simulate natural phenomena. This includes professionals who are not software developers but use programming to solve problems in science and engineering. And, of course, hobbyists.

Exploring and understanding the problem domain is an integral part of the books' projects along with coding. This is unlike typical programming books where the examples are often trivial, have little or no domain depth, and are stripped of everything but the essentials.

The sample code is straightforward, clear, and hints at how much can be done with little code. Since the books are not language tutorials, they focus on prototyping and exploration rather than building large and maintainable systems.

This milestone is mind blowing, humbling, and unexpected.

The project is a categorized list of Python books that are free to read or download. Despite the simplicity, something in the resource resonates with many Python developers and enthusiasts.

It all started as a personal list of books I discovered while learning Python, which I wanted to read later or reference. I shared the early list on Reddit and it snowballed from there.

I'm happy also because this success hints there are many learners who, in the age of video, still seek books and text resources.

I'm about to resume working on my Suite8080 project after putting it aside for a few months. And I bought a Z80 homebrew computer.

It's a short, clear resource that includes several worked out exercises. It presents and compares the code samples and concepts in both instruction sets. The book also covers how to implement basic data structures in Assembly, which makes it stand out.

The Physicists’ Daughter: a wartime mystery

The historical novel The Physicists’ Daughter by Mary Anna Evans has just been published. 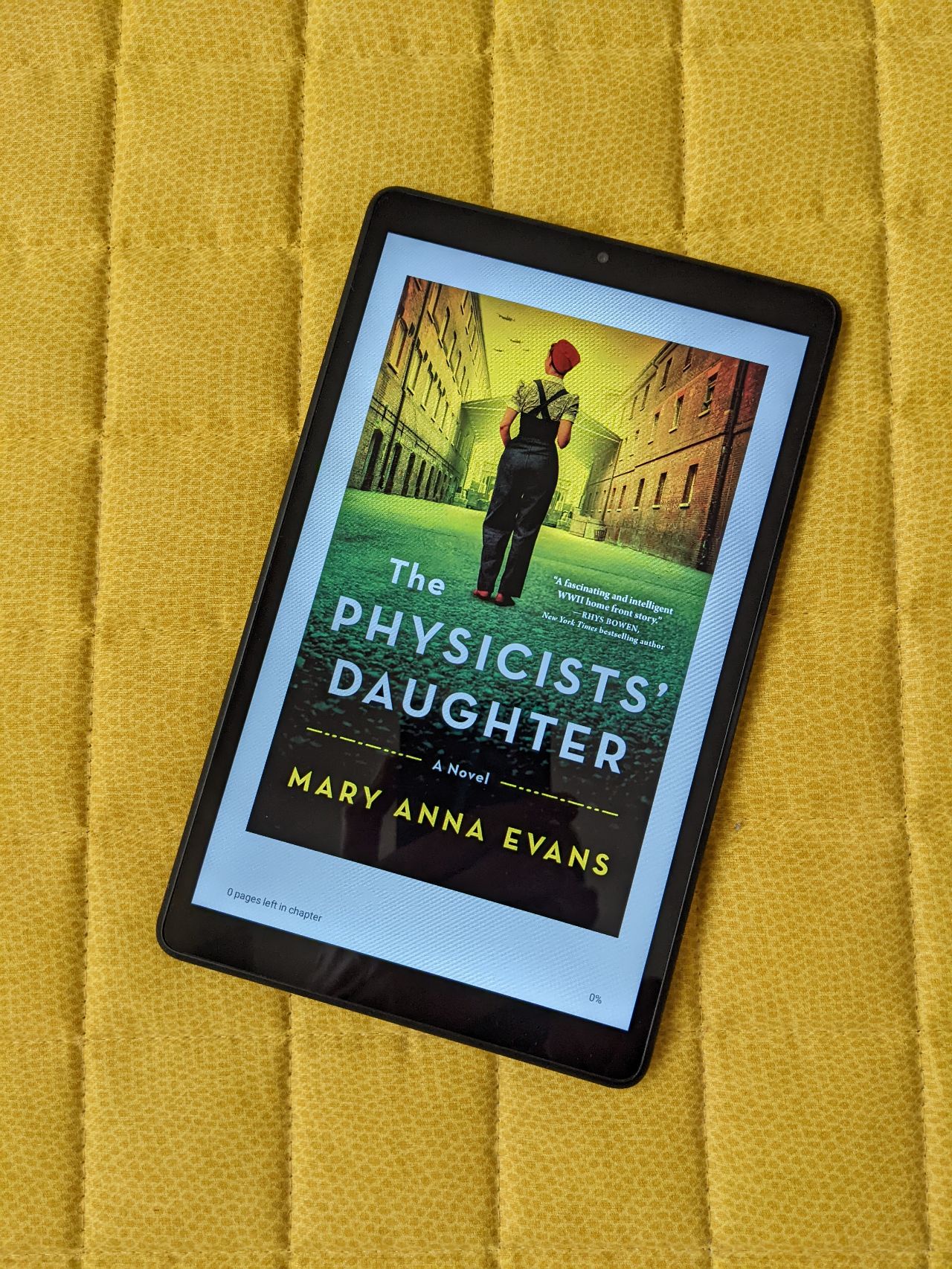 As a beta reader I had the opportunity of contributing feedback on the manuscript. I loved the story, the protagonist, and the setting. I nodded at all the geeky references to physics and the history of 20th century science, which is not suprising given the author's professional background in physics and engineering. However, the novel is for everyone and hooks you from the start.

A couple of decades ago I helped Evans brainstorm an astronomy related plot element of her novel Artifacts, and I have been enjoying her books since then.