Success with connecting the Z80-MBC2 to chromeOS

It turns out the Z80-MBC2 Z80 homebrew computer does work with chromeOS. This screenshot of a Minicom session under Crostini Linux shows CP/M 3.0 booting up on the Z80 board. 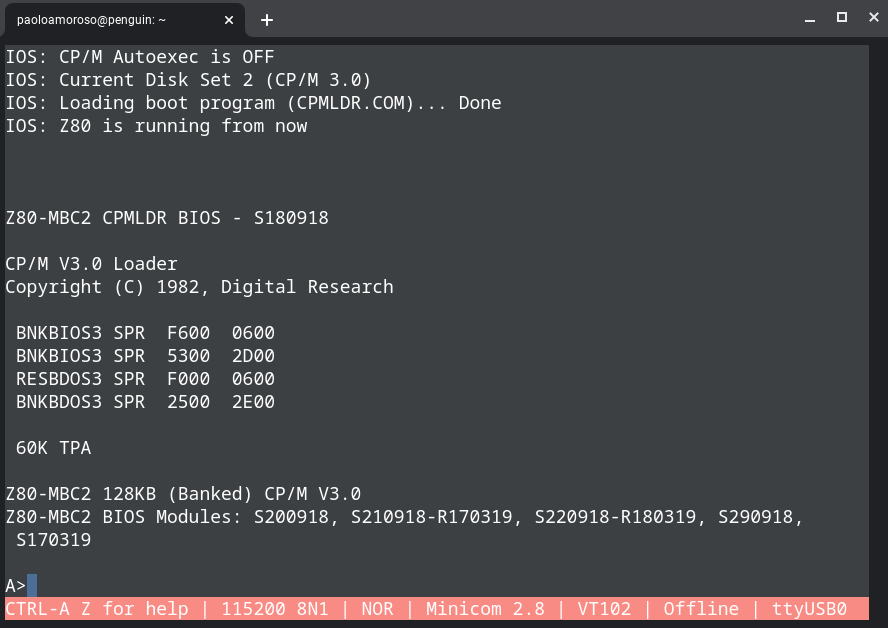 It took some troubleshooting of the connection between the Z80-MBC2 and my Chromebox to make chromeOS detect the board. How?

I just re-plugged the board's USB cable into the Chromebox.

The idea came as a result of asking for help on r/chromeos. A redditor noted connecting a USB serial device to a chromeOS machine is a bit hit and miss, i.e. some attempts to connect may not be successful.

This prompted me to re-plug the Z80-MBC2, and chromeOS popped up a notification to let me share the detected USB device with Crostini. It's been working consistently since then.

Interestingly, the board is supported only under Crostini but not in the Android container or the web subsystem of chromeOS, as the Serial USB Terminal Android app and the web apps based on the USB Web Serial API still don't detect the Z80-MBC2.

I can finally dive into and play with this awesome gadget. Fun ahead!